2.6 The company on the securities market

Authorized share capital of PJSC RusHydro as of December 31, 2016

The Company’s shareholders are more than 340 thousand domestic and foreign investors. The Russian Federation owns a controlling stake in 66.84 %. As of December 31, 2016, the Group had 18,852,353,167 shares or 4.88 % of the Authorized Capital of RusHydro from which 3.55 % were owned by JSC HydroInvest. There are no own shares at the Company’s disposal.

In accordance with the list of persons entitled to participate in the annual General Meeting of Shareholders, compiled on May 23, 2016, “Gazprombank” (Joint Stock Company) was a shareholder owning 6.367 % of the voting shares of the Company. On April 4, 2017 the share of “Gazprombank” (JSC) voting shares decreased to 4.96 %.

Completion of PJSC RusHydro shares additional issue and sending a report on the results of the additional issue of the Company’s shares for state registration with the Central Bank of Russia is planned for May 2017. 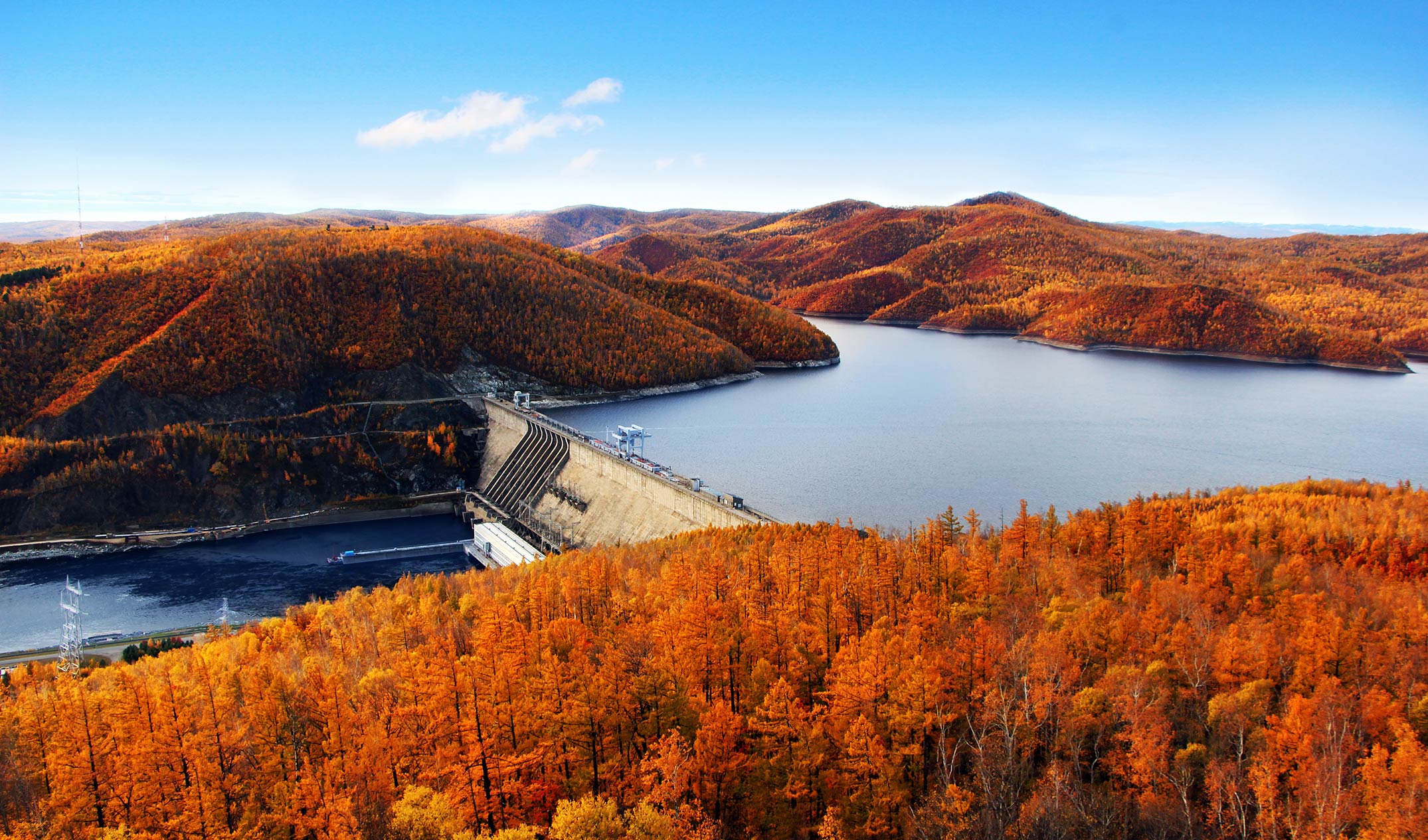 Foto: The reservoir of the Zeya HPP.

2.6.3 Company securities on the Russian market

Since 2008, RusHydro shares have been included in the quotation list of Tier 1 and traded on the MICEX Stock Exchange under the ticker symbol HYDR, and in March 2013, the Company’s shares were among the first on the Russian Stock Market, which were admitted to trading on the T+2 trading system with partial collateral and deferred trade execution.

The company’s shares are components of major stock market indices, as the Russian, such as MICEX, RTS, MICEX the Power, RTS-Utilities, MICEX BMI, an index of companies state-owned shares (SCI) MICEX), and international: MSCI Russia, FTSE All World Emerging Europe.

Trading results for the shares on the stock market

Dynamics of the company’s share price and trading volume

In 2014, the MICEX index lost 7 % and the MICEX index of Electricity decreased by 23 %, RusHydro – 5 %. The main negative factors for the Russian market began a sharp decline in oil prices in the second half of the year and economic sanctions of Western countries against Russia. Leading compared with the MICEX index rate of decline in the industry indicator was due to the low investment attractiveness of the company sector with restrictive tariff policy, including zero tariff indexation in 2014.

Support for RusHydro shares, whose growth reached 31 % during the year, had a number of factors, including the liberalization of the market power of the Siberian hydropower plant, the positive results for the company COM-­2015, electricity price growth in the second price zone in the second half.

In 2015, the MICEX index gained 26 % and the MICEX index Electric power – 18 %, RusHydro shares rose by 25 %. Support for the Russian market as a whole is improved attitude of global investors to assets in emerging markets against the background of conservation soft monetary policy leading central banks and expectations in the medium term, the recovery of the Russian economy.

An additional positive for RusHydro became the continuation of the liberalization of the Siberian hydroelectric power sales, outcomes CCA, electricity price growth in the second price area, the Company introduced new capacities, as well as actions to improve the Company’s financial profile RAO ES EAST.

In 2016, the MICEX index added 27 %, the MICEX index Electric power industry – 110 %, RusHydro shares increased by 36 %. Support for the Russian market as a whole was provided by the expectations of the recovery of the Russian economy and strengthening of the RUB rate in the second half of the year.

The growth of RusHydro’s shares was facilitated by high dividend payments, the completion of the liberalization of the sale of the capacity of Siberian hydroelectric power plants, as well as the strong operating results of the hydro-generating segment against the backdrop of rising water availability. In addition, the positive for the shares were measures to optimize operating and investment costs, making decisions on refinancing the debt of RAO ES EAST Holding by raising equity financing in the amount of 55 billion rubles from VTB Bank with the conclusion of a forward contract; consolidation RAO ES EAST block of shares due ti r each ownership to 100 %. An additional factor of growth was the Company’s implementation of large assets.

Development stages of the DR program

Results of depositary receipts trading on the LSE

Dynamics and volume of trading ADR

The main purpose of the Company’s dividend policy is to ensure the RusHydro’s strategic development and increase shareholder wealthfare by establishing an optimal balance between dividend payments to shareholders and profit capitalization.

To ensure transparency on defining the size of dividends and their payment, RusHydro adopted a Provision on dividend policy. The Board of Directors draws up recommendations on the size of the dividend for approval by the General Meeting of shareholders, focusing on net income, determined in accordance with the consolidated financial statements of the Group for the RusHydro International Financial Reporting Standards and the Russian Accounting Standards, as well as the Company’s need to finance its investment program. The annual dividends distribution rate shall not be less than 5 % of the profit for the period determined in the consolidated financial statements under IFRS RusHydro Group.

It is important to say that according to the Development Strategy of the RusHydro Group for the period until 2020, with a perspective of up to 2025 – at least 50 % of the net profit shall be distributed as dividend. Thus the Company will aim to ensure a high dividend yield to its shareholders.

By decision of the Annual General Meeting of Shareholders of 27.06.2016, 15,011,046,132.02 rubles were transferred for distribution of share dividends in 2015 (50 % of RAS net income or 55.2 % of the profit RusHydro Group in accordance with IFRS), which is about 2.5 times more than according to the results of 2014. As for 31.12.2016 the payments were made in full to all persons registered in the register of shareholders, with the exception of 45,895,273.92 rubles, which have not been paid for reasons beyond the Company: the absence of registration or incorrect address and mailing address; incorrect bank details of recipients of income referred to in the application (statement), provided by the registrar, the method of payment – «bank transfer».

Dividend yield of
the company’s shares, %*

Share of net profit calculated
based on RAS, allocated to dividend payments

Dividend history for the previous 5 years

As of December 31, 2016 there are nine issues of bonds of PJSC RusHydro with a total nominal volume of 75.0 billion rubles (with 60.25 billion rubles in circulation).

Main parameters of the bond issue